Media should stop caring about news

Instead, they should focus on outcomes.

This may seem hyperbolic, but I am very serious. Partially because their financial prospects are still very precarious, but also because the current news environment is failing us (which could be the subject of another post).

The business model failure shouldn’t be surprising: for years, Facebook and Google have been capturing a huge part of the online advertising market (around 70 % in the United-States). Now “cracks” are appearing, but the challengers are Snapchat, Amazon, Pinterest and Twitter. So, more of the same.

If we look at the larger “attention economy”, things aren’t much better: you can add Netflix, the Xbox, TikTok and all other companies that are clamouring for our attention and that want us to engage with their content. That’s a lot of content. Small wonder “media” is having a hard time.

Some might argue that this is misleading: news “plays a key role in our society”, it is the “core function of democratic systems” and it would be rude to compare an exposé about the Panama papers to the last Netflix comedy special.

Obviously, an article about about a US government whistleblower report is not the same as Dave Chappell joking about “never making fun of the alphabet people”, but what these critiques fail to capture is that most news is not groundbreaking, tear down the system level material, either. Most of the time, journalists are focused on building and sharing narratives that will take shape in articles, videos, interviews, listicles, etc. a. k. a. producing content.

That content will be shared as widely as possible - after all, news is important! - newsrooms will track how many people consume it and stay engaged. At least, much more than how people will use that information. Which, sadly, makes “news content” functionality equivalent as any other piece of content such as that new comedy special I mentioned earlier.

E.g. At the end of the day, in such a system, successful papers are the ones that are best at capturing attention and directing it at ads.

This is not hyperbole. For example:

In short, it’s not so much that I put news as a player in the attention economy as much as they put themselves in it.

Which is clearly a losing proposition if only because of how Mark Zukerberg aptly put it: “A squirrel dying in front of your house may be more relevant to your interests right now than people dying in Africa.”

Instead, I say they should opt out.

To opt out of the attention economy, news should focus on enabling the outcomes people want to achieve when using their products.

Yet, that seems to be a major problem of media, or at least, of general interest news: if you ask a random person on the street why they follow the news, they will most likely say they do it to “stay informed” or as a form of civic duty.

Which is extremely unhelpful and worrying as it is circular logic: I need to follow news to know the news (“what’s happening”).

In comparison, ask a trader why he pays for a Bloomberg terminal and he will most likely tell you that it’s a tool that helps him plan his strategies, make sense of the market, etc. In short, he has a clear understanding of the value he is getting from the terminal as he clearly knows what his outcome is: make successful trades.

This is not just about “business news” vs. “general interest news”. Understanding intent and outcomes is fundamental to being able to find new and better ways to solve problems. And to be sure that you are actually solving the right problem!

Ask someone why they cook, you will most likely have a wide variety of responses.

Some might cook for nourishment, in which as Soylent might be enough, some will cook for pleasure, in which case, they might want to find tastes they want to try new things and be surprised, some others might cook to host and share a good time with friends.

Even if all of these meals are about eating, the outcome and how people value them vary greatly with the goal.

Similarly, consuming news to “stay informed” is not enough. Media needs to acknowledge and understand that people consume “news” for specific reasons.

I believe that this “why” is actually quite simple: making better informed decisions.

A failure of imagination

I’ve spent quite a few words pontificating about the ails and shortcomings of the news industry and this might seem like a very theoretical rant.

However, there are actually real examples on the market today that demonstrate that these shortcomings are more about a failure of imagination (or, possibly, inertia from misaligned incentives) rather than actual technical limitations.

One of the media companies I love, truly, is Vox Media. They have multiple properties, notably Vox, The Verge, Curbed, Eater, New York Magazine.

Vox Media brands each build their own platform. As a result, they can be very experimental.

One of the products I love, truly, truly love, are the Eater maps. They are still very “newsy” with titles such as “The essential restaurants of La Petite-Patrie” or “Montreal’s Newest Brunch Services, November 2019”, but they all enable a very simple decision: “Which restaurant should I try right now?” 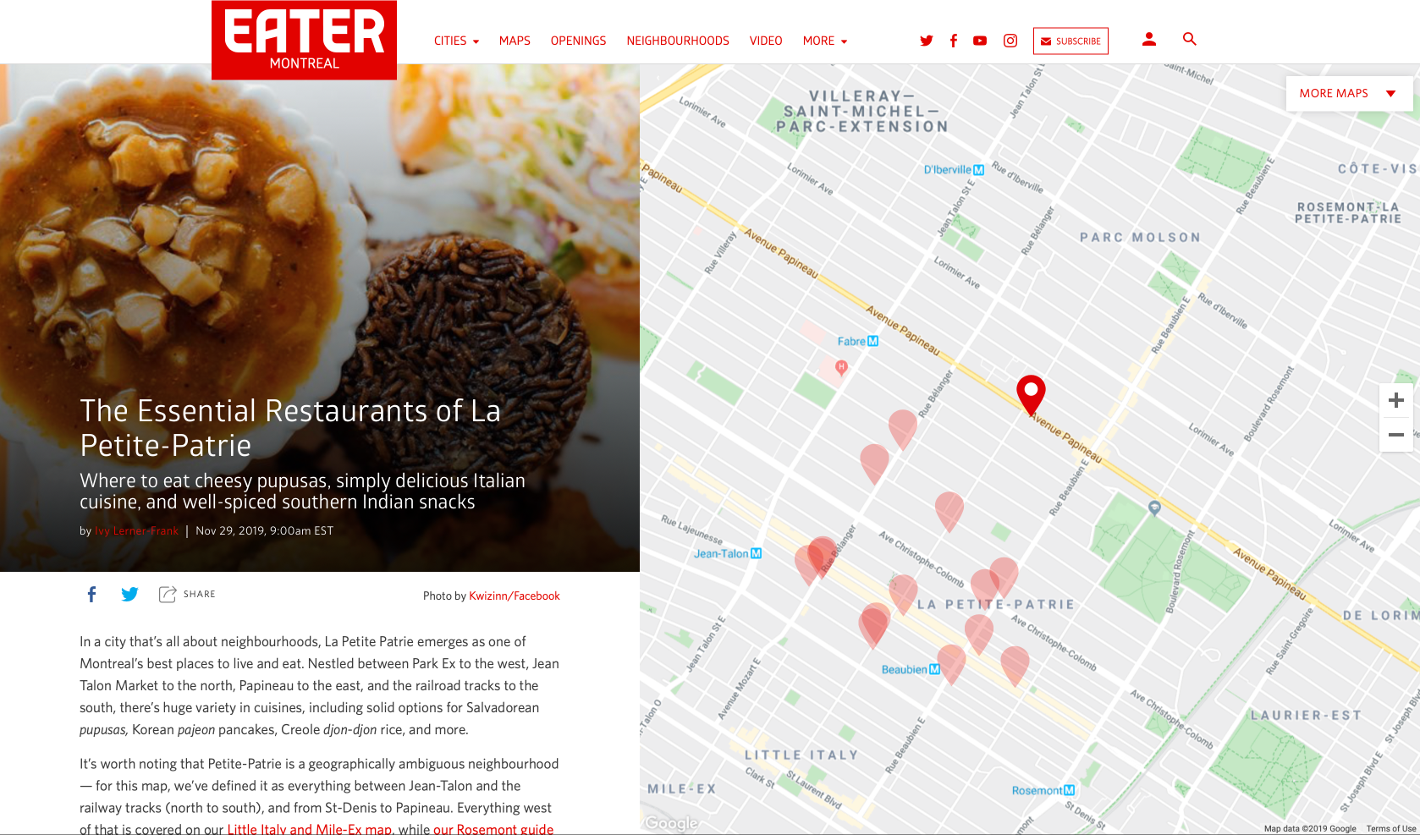 Vox, although using more traditional formats (articles, videos, etc) also seeks to answer specific questions: “what the hell is happening? And why?”

Being “needs first”also enables business model innovation. The Wirecutter, a review site, understood that people wanted easy access to authoritative reviews about products they would buy.

As a result, they produced very thorough reviews of most every tech product one might want to buy. Eventually expanding in the home with the SweetHome.

However, instead of choosing a subscription model like Consumer Report (or Protégez-vous in Québec), they used affiliate links and made a commission for every purchase generated by their sites.

One last example: just look at the navigation of The Information a new, SF-based “business paper”. Clearly, they understand that their customers have a set of “jobs-to-be-done” that go beyond getting business information and they are seeking out ways to serve them. 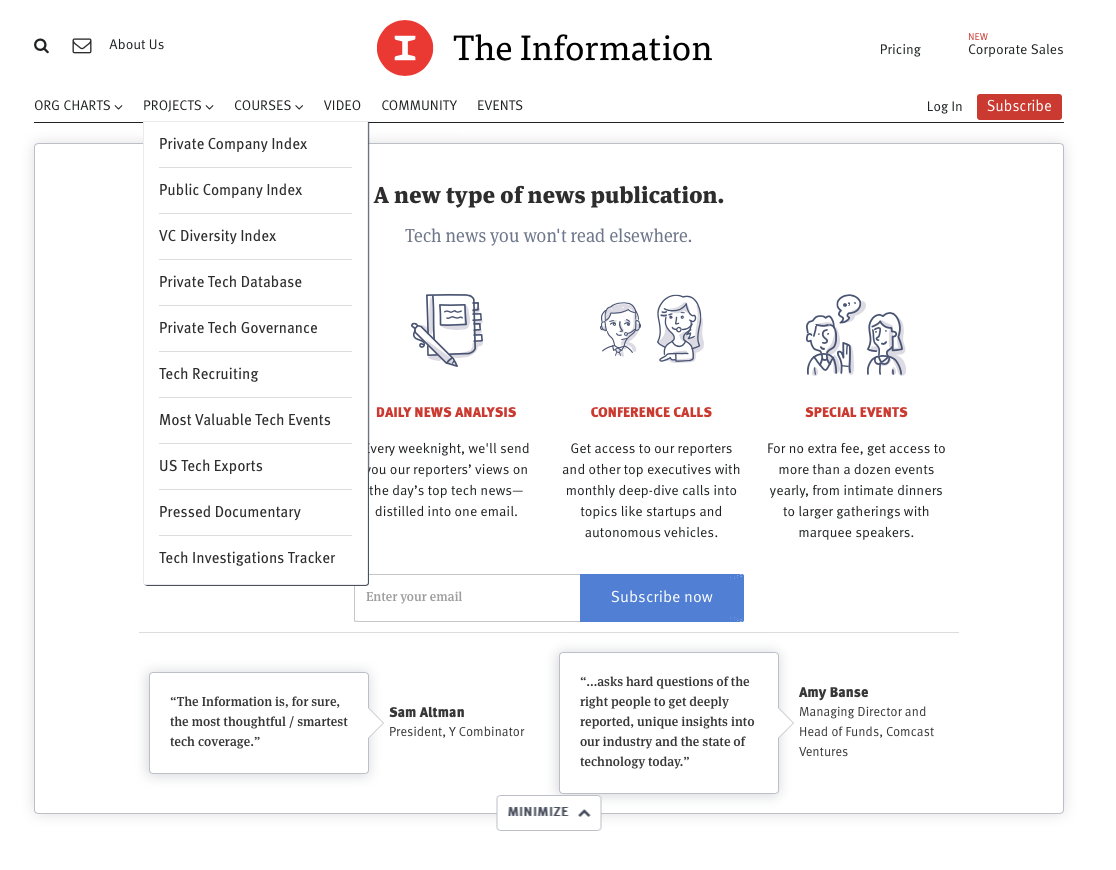 In short, if you stop considering news as “content” and more as a need to be fulfilled, then anything related to organizing information and making it actionnable for me as a consumer and a citizen is fair game.

A mandatory shift in perspective

“Organizing information and making it actionable to me” is quite broad, but that’s intentional.

The idea is that media organizations should focus first on the need to be solved and then choose the best way to deliver it.

They don’t “have” to produce articles, videos and other “narratives”; media organizations have been creating other types content for ages. They have been creating interactive timelines, visualization, charts and dynamic electoral maps.

Hence, the problem is not technical capabilities, it’s self-image.

For example, I never understood why they apps like Delectable or Untappd weren’t media company products. After all, they produce a lot of content about wines and spirits. 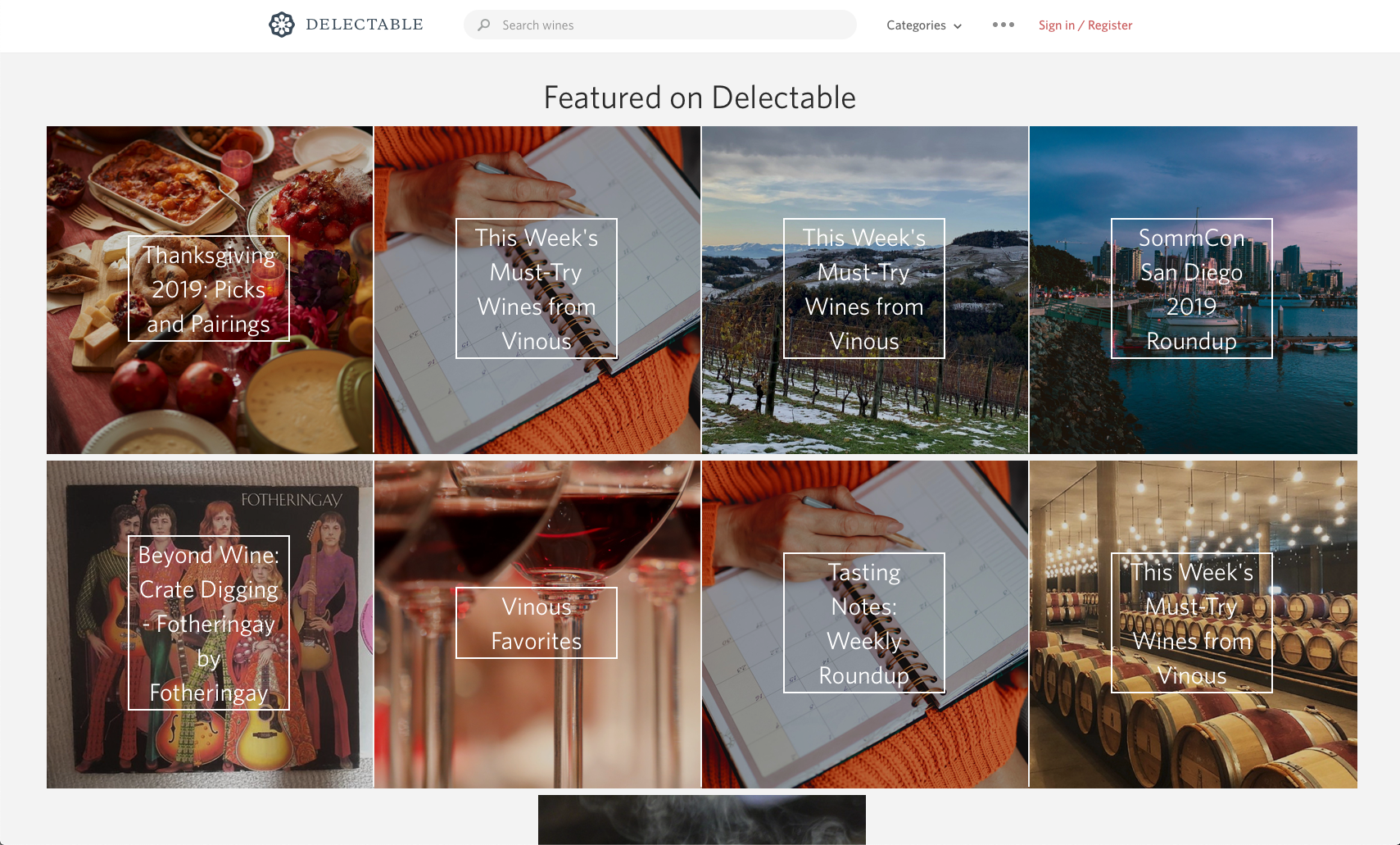 I understand that building a community is not the same as having the best wine critic on staff, but… that’s a false choice!

They could have both the best wine critic on staff AND have a community. They could even use the community to spot trends before they are well known!

The point of the matter is that people don’t just read to “stay informed”. They do it to know if they will have prepare for the end of the world, if they should vote for Joe Biden or Elisabeth Warren, to learn more about electric cars.

If they focus less on content and more on outcomes, they will have a much better understanding of the value they are providing, have multiple ways to make money and, as a bonus, offer an experience that Google or Facebook won’t be able to copy as they are allergic to paying humans for creating content.

I don’t know what these products will look like, but I do know that making them will require good old customer research and a willingness to truly experiment.

Ready to supercharge your business?